C2E2 Round Up – The SurlyGurls Favourite’s From Artist Alley

One of our favourite things about attending comic conventions is the chance to be surrounded by artistic and creative people. We spent an inordinate amount of time walking the aisles of Artist Alley at C2E2 this year, blowing most of our money on prints and original artworks.

Aside from broadening our already large collections of art from cons all over North America, we got to meet some of the nicest, most talented people we have ever had the chance to chat with. Not only does it mean more when you learn the story behind the prints you’re buying, but it also tends to give Andrea the desire to draw and draw and draw whenever we return home. (She’s the creative genius behind our SurlyGurls yelling faces!)

We thought we would enlighten you all with some of our favourite artists that we met this year. They are all 100% worthy of your time, so you should check them out…NOW!

One of the coolest things that happened this year was a small Twitter sensation over our friend Matt Graham’s commissioned piece from Mark Brooks. Matt had Mark sketch Kristen Stewart as the new Snow White from the upcoming film ‘Snow White and the Huntsman’.

Brooks is best known for his exclusive partnership with Marvel, having contributed art work to many of their most popular titles including Marvel Age, Cable & Deadpool, The Amazing Spiderman and New X-Men.

END_OF_DOCUMENT_TOKEN_TO_BE_REPLACED

A Recipe For Adventure With Josh Gates And ‘Destination Dinners’

It’s no secret, we are big fans of Josh Gates and his fabulous travel/monster hunting show, Destination Truth. So when the option to head to C2E2 this past weekend presented itself, we jumped at the opportunity.

Having raged about the fact that every year he’s relegated to moderating panels for crap like ‘Sanctuary’ at SDCC instead of being given his own panel, we were quite excited to attend his hour-long Q&A session.

We would finally get to hear all the behind the scenes stories and anecdotes from his five-years as Syfy’s resident globe-trotting monster hunter. It was his fans chance to inquire about whatever happened to that weird alien carcass he unearthed in Chile, or the follow-up to what the yeti hair he discovered in Bhutan really was.

When the panel began Gates seemed to be somewhat nervous, not knowing where to sit or what to do at first. (This is the guy that climbed into a decrepit gondola over a gaping chasm of death in Bhutan without blinking an eye.) He recovered quickly and was back to his wise-cracking, pop-culture-referencing self in no time. He delighted the crowd with a hilarious story about accidentally getting locked in a stair well with his C2E2 handler who had just delivered a gigantic Starbucks beverage to him on stage.

END_OF_DOCUMENT_TOKEN_TO_BE_REPLACED

The SurlyGurls Head To The Windy City for C2E2

“The Chicago Comic & Entertainment Expo — also known as C2E2 — is a convention spanning the latest and greatest from the worlds of comics, movies, television, toys, anime, manga and video games. C2E2 is lovingly handcrafted by the same people that bring you the New York Comic Con. Come meet your favorite comic artists, creators and celebrities, and mingle with other comic con fans in Chicago. C2E2 is the con Chicago needs and the con you deserve!”

The longest day of your life is the day you spend sitting at your desk, watching the clock countdown to your escape from work. That was exactly what happened to us on Thursday as we waited for our C2E2 adventure to begin.

Our good friends Lenna and Matt Graham – both of who are also pop culture addicts and super creative; Lenna works as a graphic artist and Matt is a fantastic artist and comic-book blogger – picked us up and we hit the road for our epic midnight road-trip to Chicago.

We got a quick bit of sleep in Benton Harbor, MI and started out for the last two hours of our drive first thing in the morning. What none of us accounted for: crossing into a different time zone. We ended up dropping Matt – who had to pick up his press pass – at McCormick Place a good hour before the doors opened. We quickly checked into the hotel, dropped our suitcases and headed back ourselves to pick up our passes and start the weekend.

END_OF_DOCUMENT_TOKEN_TO_BE_REPLACED

So, the SurlyGurls had a long night of drinking and partying Chicago style – including our first ever deep-dish pizza at Lou Malnati’s – which means we’re feeling a little fuzzy this morning. 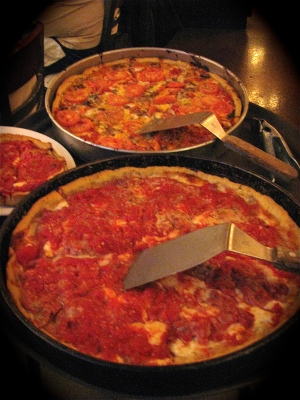 We had an AMAZING day yesterday. Saturday was definitely a lot busier than Friday which meant there was a lot more to see and do. We attended some amazing panels, our favourite of which was by far was John Barrowman, but more on that later when we’ve had more than 3 hours sleep each night!

We’re going to keep this short as we want to get in as much fun this morning as we can before we hit the road for our 9 hour drive back to Canada. Once we get home we’ll  post a full run down of all the awesome we encountered here in Chicago!

It’s quite early here in Chicago, but we wanted to give you all a little round up of what went on yesterday at the first day of C2E2! 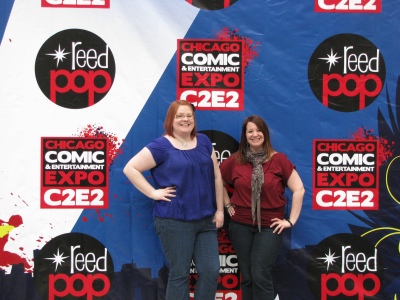 Unlike San Diego, it was a lot more chill yesterday morning as we sauntered up to the registration booth where the attendants looked bored. It was a treat to walk into the line about 20 minutes before the doors opened and still get onto the show floor in about 5 minutes.

Our day was full of some of the best people watching we’ve had in a long, long time! It was great to wander the floor, check out the art and comics and just stare in amazement at the – how should we put it – questionable costume ideas some people decided on. However, there were some great costumes like our favourite Canuck Scott Pilgrim and his fiesty lady, Ramona Flowers here:

We also chatted briefly with our favourite monster-hunter, Josh Gates, at his autograph signing and are looking forward to hearing his BIG announcement this afternoon. Day One was a chill day in which we met some amazing artists including Christopher Mitten and Sara Richard; we got to people watch and just enjoy the atmosphere of the con. Today however, we’re thinking it’s gonna be a little more crazy.

Stay tuned for updates and tweets through out the day and the weekend!

Who doesn’t love those adorable ‘My Little Pony’ toys?!, Certainly no one we know! Though, it’s no great secret that we prefer the 80s toys to the new ones. You know, before the re-imaging that made them too skinny and gave them all freakishly long legs!

But, Hasbro isn’t the only one who’s doing some re-imagining with the ponies! The Internet is full of artists who have crafted these magical little creatures into a wide variety of other pop culture characters.

So, we’ve put together a gallery of our favourite, wildly impressive customized ‘My Little Pony’ sculptures for your viewing pleasure! After all, that’s the magic of friendship!!

Let’s start with some customization based on other popular 80s cartoon characters:

Wish Bear – Looks like someone wished to be a Pony!

Starlite – The  most magnificent Pony in all of Rainbow Land!

Swift Wind – Such an improvement from boring ol’ Spirit!

These 80s cartoon character ponies are courtesy of Samantha Claridge of the  United Kingdom. She proves there is nothing better than combining the best cartoons of the 80s into one awesome figurine!! Check out her deviantart page for more pony customizations and some pretty awesome drawings! *Spoiler Alert* There is more of her pretty ponies to come!

He-Man – Masters of the Universe

He-Man – By the Power of Greyskull! I am He-Pony!

Skeletor –  Overlord of Evil and sworn enemy of He-Pony!

These two ‘He-Man’ ponies were created by Mari Kasurinen, a mixed-media artist from Finland. She likes art because it’s pretty, and her contributions to our ‘My Little Pony’ conspectus most certainly are very pretty!! So, let’s move into some of her movie customizations – because these are absolutely incredible!!

END_OF_DOCUMENT_TOKEN_TO_BE_REPLACED

Its time to return to Westeros and the fight for power.

Season 2 of HBO’s wildly popular ‘Game of Thrones’ returns tonight at 9 PM. As if there weren’t enough people vying for the title of King, this season promises many new characters who will be throwing down the gauntlet for the title as well.

Season 2 will be based around creator and fantasy-God George R.R. Martin’s second book in the series ‘A Clash of Kings’. Hopefully the show can keep up the momentum and keep fans happy.