The turkey has been eaten, the presents unwrapped and we’ve rung in 2012. Now it’s time to get back to what’s really important this time of year…midseason premieres!

It’s all about ABC tonight in T.V. land.

At 8 PM those secret keeping ladies are back in the winter premiere of ‘Pretty Little Liars’. Rumour has it that ‘A’ will be revealed, so for those of you out there who care about this show, it could be an exciting night for you.

As if that isn’t enough, the return of ‘The Lying Game’ begins at 9 PM. This is a show based on a fake series of books from ‘Pretty Little Liars’ about twins separated at birth who find each other as teenagers. It’s essentially ‘The Parent Trap’ with less wholesome hijinks and more sex and scandals.

There is no rule stating that your Geeky Goddess can’t also be a Domestic Diva. And if you’re lucky enough to have a lady that likes to bake for you, these adorable cupcake molds are perfect!

It’s only a matter of time before the robots go all Cylon on us, so we may as well get some delicious treats from them first. Seriously, cupcakes in the shape of robots…how does it get any better than that?

These awesome little silicone molds are even able to turn their heads, perfect for displaying them at holiday parties. Each set includes four differently coloured molds. Now all we need are actual robots to bake the cupcakes for us! 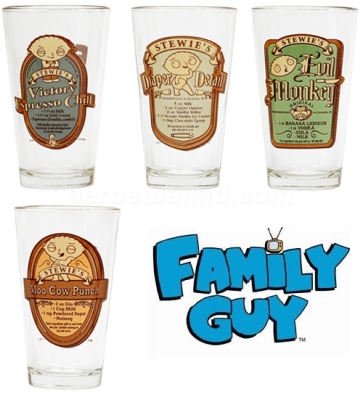 Stewie Griffin loves him some booze!

As we discussed previously, boys love their beer. And if you’ve decided to get your special man some “loud mouth pops” for the holidays why not dress up his refreshing beverage in one of these outstanding pint glasses from PerpetualKid.com!

Why that baby has four favourite alcoholic beverages is beyond us…

DC COMICS VINTAGE PINT GLASS SET
You won’t need the Lasso of Truth to know that your beau loves this Pint Pack! This set of pint glasses are printed with the classic comic cover art of DC Universe heavyweights Superman, Batman, Wonder Woman, and Green Lantern. Perfect for enjoying a cold one in one’s Fortress of Solitude!

ATARI ARCADE PINT GLASS SET
Keeping with that retro feeling, may we suggest the Atari Arcade collection? Everyone loves the simplicity of a game that’s primary purpose is to achieve the highest score. Those delightfully catchy beeps and bings, the ground-breaking 8-bit graphics, who doesn’t want to relive those days through glassware!? Set features Asteroids, Missile Command, Tempest, and Centipede.

GOONIES PINT GLASS SET
This set only has two glasses, but they are awesome enough to rival the four-piece sets! One glass has Chunk doing the Truffle Shuffle, while the other features Sloth yelling, “Hey you guys!”. Personally, I would like to see a “Mikey’s got to go to the bathroom” glass… but that’s just me.

Make sure your files survive space and time

We all hate going back to work after all the turkey and stuffing and presents of the holiday season. Why not make your cubicle-bound cutie a little more excited about staring at her computer all day?

While this TARDIS USB hub won’t allow to travel through time or space, it will allow you to save time and make space on your computer’s hard drive. Depending on the office, you can even set the TARDIS to make it’s dematerialization noises when adding or removing files.

We can’t guarantee though, that your girl won’t take every chance to day dream about meeting her very own Gallifreyan guide to the universe. Because let’s face it ladies, The Doctor is one alien we would love to be stuck in a phone box with. (Whitney’s note – Mr. Tennant, I’m looking at you!)

Dark and atmospheric...just the way the Dark Knight should be

Now, we’re am going to go ahead and assume that your geeky guy plays video games. We don’t know what console your boyfriend has, but we’re going to assume it’s not a Nintendo Wii as that is a baby platform. It may as well be called the Nintendo Speak ‘N’ Spell.

But, moving right along. Here are Andrea’s top picks of some awesome video games that will surely be on his ‘must have’ list. May she also suggest getting out of the house for a while, unless you want to hear him constantly yelling into a headset about how he’s “going to pwn some n00bs”!

Follow up to the hugely popular and acclaimed ‘Batman: Arkham Asylum’, this game incorporates beautifully atmospheric cinematics, satisfying combat and a multitude of side quests in order to make this a top-notch gaming experience.

This PS3 exclusive title is the third game in the Uncharted series. PlayStation Official Magazine (UK) stated in their review that it was not only the best on PS3, but also one of the best in gaming history. Wow! Just Wow! The gift of this suspenseful and intense action-adventure masterpiece is bound to win you some brownie points!

This game is just fun in the most basic sense. Everything about this instalment in the series is over-the-top and outrageous! It allows your character an incredible amount of freedom and has an open-environment that rivals that of the ‘Grand Theft Auto’ games. Insane weapons and vehicles just add to the experience. Concerned that your boyfriend hasn’t played the previous games? No worries! No prior knowledge is required to enjoy this game.

And just in case your special guy comes home and does chill out on a Wii… I recommend ‘The Legend of Zelda: Skyward Sword’  [Wii]

A prequel to the wildly popular and praised ‘Ocarina of Time’, this game has some big Pegasus Boots to fill. But, I have a special place in my heart for this series of games and don’t expect this title to disappoint either. 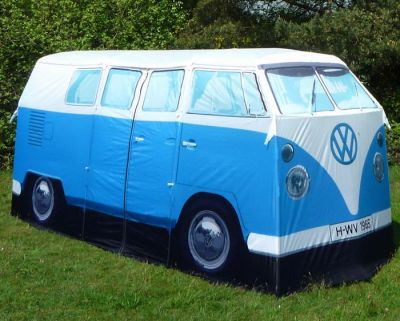 The perfect tent for peace and love music festivals or solving mysteries with your talking dog.

Does your nerdy beau like to pull himself away from his video games, laptop and WiFi every now and again in order to get out into the splendour of nature? Well, why not wrap up this incredible full-size replica of the 1965 VW Camper Van!?

There is no need to show up at some fabulous National Park and deface it with an unexciting and mundane tent! With this fabric tribute to 60s hippie culture, you could be the envy of everyone, including Mother Nature.

Not only is it a sight to behold, but with a height of 182.5cm (convert that yourself, non-metrics!) its tall enough to allow you to stand up inside! Anyone who has ever crawled around in a hobbit hole of a tent knows that is an awesome quality!
Because walking on all fours is for animals! ….and babies!

This is a four-man tent also has two zip-separated double size rooms, for when you and your nerdy mountain man want to revisit the Summer of Love on your own.

While North America’s National Parks probably won’t get nearly as cold as the planet Hoth (unless you’re winter camping in Alaska…eek), nothing says warm and cozy like the inside of a fantastical dead animal! We promise, it doesn’t smell as bad as the real thing.

Our good friends over at thinkgeek.com offer up another amazing gift for your geek with their Tauntaun Sleeping Bag.

The best part is, you don’t have to pull your girl away from her game of Portal 2. This sleeping bag is perfect for keeping your sweetie warm even in the sub-zero climate of your basement lair as well.

Booth and Brennan (and BABY!) are back for the premiere of the 7th season of ‘Bones!’ 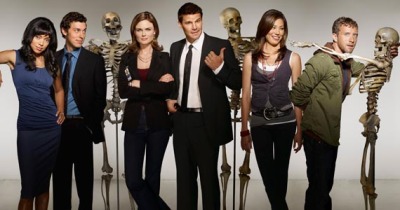 There is unrest in the SurlyGurls camp about the direction the show has been taking lately. Andrea is not impressed with how they used the death of Vincent Nigel Murray as a catalyst for Booth and Brennan to FINALLY get together. Whitney on the other hand thinks that anything that allows her characters to be together – as they should be – is just fine! However, we still both agree, it should have been Wendell!

We shall see how they handle the whole pregnancy thing tonight at 9 PM on Fox!

2012 Could Apparently Be The End Of Days…For CDs 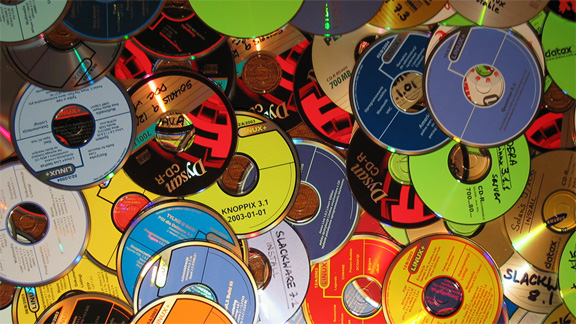 We have heard some news tonight that has sent us into a rage/depression spiral. Apparently, the major labels have decided to put an end to CD production by the end of 2012, possibly sooner. They will still keep fancy, expensive special editions, which is a mystery as only hardcore collectors purchase those now. A world without CD’s is not a world we want to live in, maybe it’s best that it’s scheduled to end next year after all.

Let us preface this rant by explaining something. We FUCKING LOVE music. Our T.V. and film passion is a little more all-consuming at the moment, but our entire friendship was built on a mutual love of rock and roll. Together we have seen approximately 550 bands ranging from local troubadours to worldwide sensations. We have no idea how much of our money has gone into collecting CD’s, buying concert tickets, and travel to and from music festivals all over North America.

We’ve been alive for a lot of changes in technology and we remember when the CD first came out. Oh boy was it exciting. Gone were the days of rewind, stop, play, rewind some more, stop, play, fast forward, stop etc… You would never have to wind the tape back into your cassette again. Not to mention, you wouldn’t have to listen to five songs, get up, flip it over and listen to the rest. It was new and shiny and easy.

END_OF_DOCUMENT_TOKEN_TO_BE_REPLACED

So the premieres are few and far between these days, but tonight is going to be a good one! And it’s all about NBC! 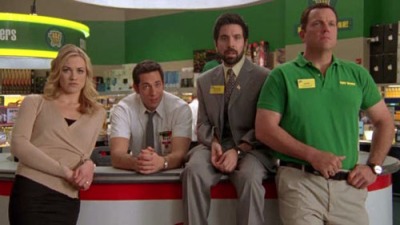 At 8 PM we have the return of everyone’s favourite nerd herder, ‘Chuck’. To be honest, if this were season two we’d be having a premiere party complete with Subway and pocket protectors. However, after last season we are kind of falling out of love with our adorable, unlikely spy. Unless of course they pull out all the stops and FINALLY go with Andrea’s idea of an intersect virus that makes Morgan evil. That we would love to see!

Then, at 9 PM is the official premiere of ‘Grimm’. We know you know we love this show already. But it goes without saying, we’ll be watching it again tonight. It’s just so good, and with the premiere on tonight that mean it’s only one week until the next episode! We can’t wait to see what happens!