Two more cannons were fired over the weekend as ‘American Reunion’ and ‘Titanic 3D’ failed to defeat the Box Office champion, ‘The Hunger Games’.

‘The Hunger Games’ has now won the Box Office crown for the three consecutive weeks, passing the #300M mark in just 17 days. Making it the sixth-fastest film ever to hit that milestone, and second only to ‘Avatar’ to hit it among the non-sequels.

Sadly, like most actual high school reunions, audiences weren’t really interested in attending ‘American Reunion’. Despite debuting in second place with $21.5M, the fourth installment in the raunchy comedy series grossed far below the other films. Maybe next time don’t kill your franchise with countless, horrible straight-to-DVD movies. Oh, and guess what! Most people don’t want to watch 30-year-olds behaving like high school kids. It’s sad.

As for the 3D re-release of ‘Titanic’, on its second theatrical voyage the epic romance didn’t really sink or swim. Granted, It pulled in $17.4M over the holiday weekend, which is less than the recent 3D re-releases of ‘The Lion King’, ‘Star Wars: Episode I – The Phantom Menace’ and ‘Beauty and the Beast’. But, you could also argue that since its Wednesday release, ‘Titanic 3D’ has earned $25.7M, which would rank its five-day opening second behind the ‘The Lion King’ ($35.1M).

Yeesh! All we know is a lot of tired old junk is making a lot of money!

Here is the estimated breakdown of the weekend totals: 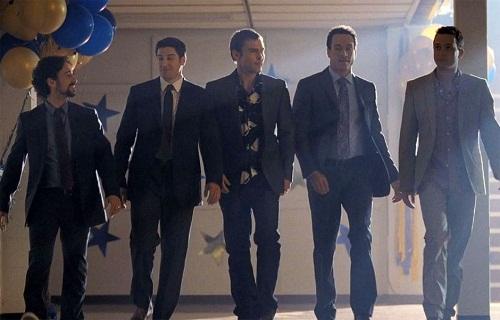 Another week, another batch of unnecessary sequels and old re-releases.

This week reunites movie audiences with the ol’ ‘American Pie’ gang. They’re all back and for the most they are all  just happy to be working again. It’s been a little over 10 years since we all first met them – so a big fail to whoever planned the 10 year reunion three years too late! But, is this really a reunion worth attending? We doubt it. Like most actual high school reunions, which are fun in theory they are lame and boring in practice.

Speaking of reunions! Everyone’s favourite doomed lovers are back too! Now you can watch Jack and Rose party down in steerage, do the nasty in the backseat of a Renault and fail to figure out how to get TWO people on that goddamn door – in 3-D!!
Thankfully, James Cameron didn’t go crazy and pull a “Lucas” with the re-release of ‘Titanic’, but he did make one change at the request of beloved and awesome astrophysicist Neil deGrasse Tyson. So this time when you see ‘Titanic’ you’ll notice that the stars are in the EXACT position they were on the night of April 14th 1912! Apparently, Tyson just couldn’t fully enjoy watching people freeze to death in the Atlantic with all those wildly distracting inaccuracies in night sky.
But, despite all that extra work, I will be too busy looking at Billy Zane and wondering what the hell he did with his career to notice some new shiny stars!

AMERICAN REUNION
“Save the best piece for last.”

Price of Admission will get you: the class of ’99 together again and ready to thrust their junk into the same old franchise formula. Besides, everyone knows that only losers go to their high school reunions – and this movie proves that point perfectly!

TITANIC (3D)
“Nothing On Earth Could Come Between Them.”

Price of Admission will get you: the same movie you got back in 1997. Unfortunately even with all the fancy new 3D effects – they still don’t see that iceberg until it is too late.